The calibre of a watch movement is a number ( or letters & numbers ) designated to it by the manufacturer for identification purposes.
This number helps to identify many aspects about the movement in question such as, design, size, function, year of manufacture, quantity made, and much much more. If watches or timepieces in general were not given a calibre then keeping track of all the various movements would be a very difficult task ( more so than it is already :) ). The calibre number also helps in identifying the correct parts that were used to make the watch complete and functional.

Do all movements have a calibre number ?

Unfortunately not, some watch movements are not marked with a calibre number, whilst they may indeed still have a calibre they have not been marked to show it for various reasons. There are also occasions where some movements simply do not have a calibre as they have been made in such small quantities, or, made by an independent watchmaker or a factor other various reasons. In the case of much older independently made watch movements, identification will often prove very difficult to impossible.

Where do i look to find the calibre number ?

Below i will show various methods with which to help to identify most watch movement calibres. In most cases it is fairly straight forward, but i will include other methods that can be used to identify movements.

The most common place to find a calibre number is under the balance cock of a watch movement. Most watch manufacturers use this placement for identification but not all. This area is always a good first place to check if it is not already clearly visible elsewhere.

Omega movements are for the most part easy to identify, below is a photo of an Omega pocket watch movement with the calibre clearly stamped under the balance cock. In this case the full calibre designation is 38.5 LT1 as pointed to by the red arrow. 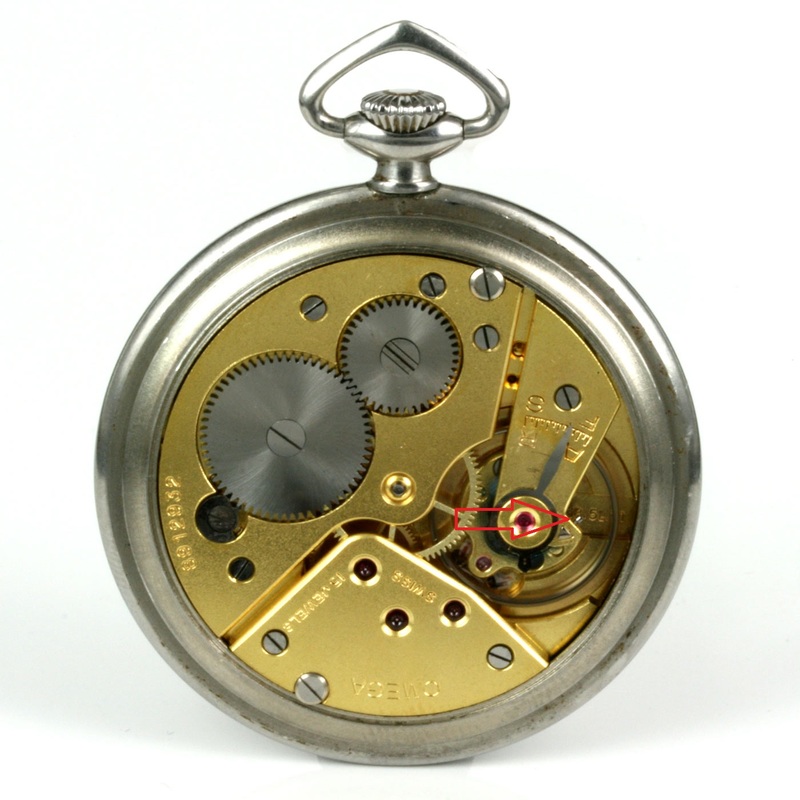 Sometimes the calibre is quite clearly marked on the outer movement plates and bridges, quite literally in plain sight. This method is much easier to see but is not always used by manufacturers. Omega also employ this method on certain movements, as do other manufacturers. 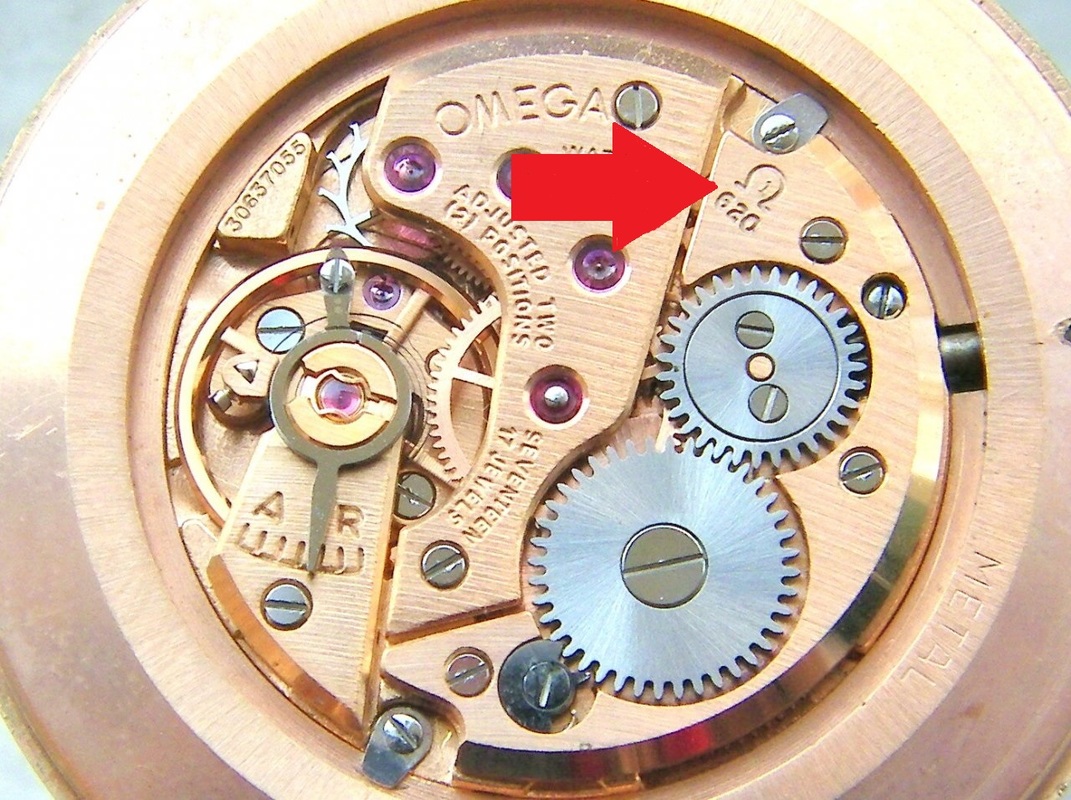 Although having the calibre marked on the movement can be a useful and often quick way to identify a movement, there are some occasions where a marking or number can be confused for the calibre incorrectly. Below is a photo from one of my recent Rotary watch repairs in which a A.S 984 calibre movement is used, but i often see this movement misidentified as calibre 440. 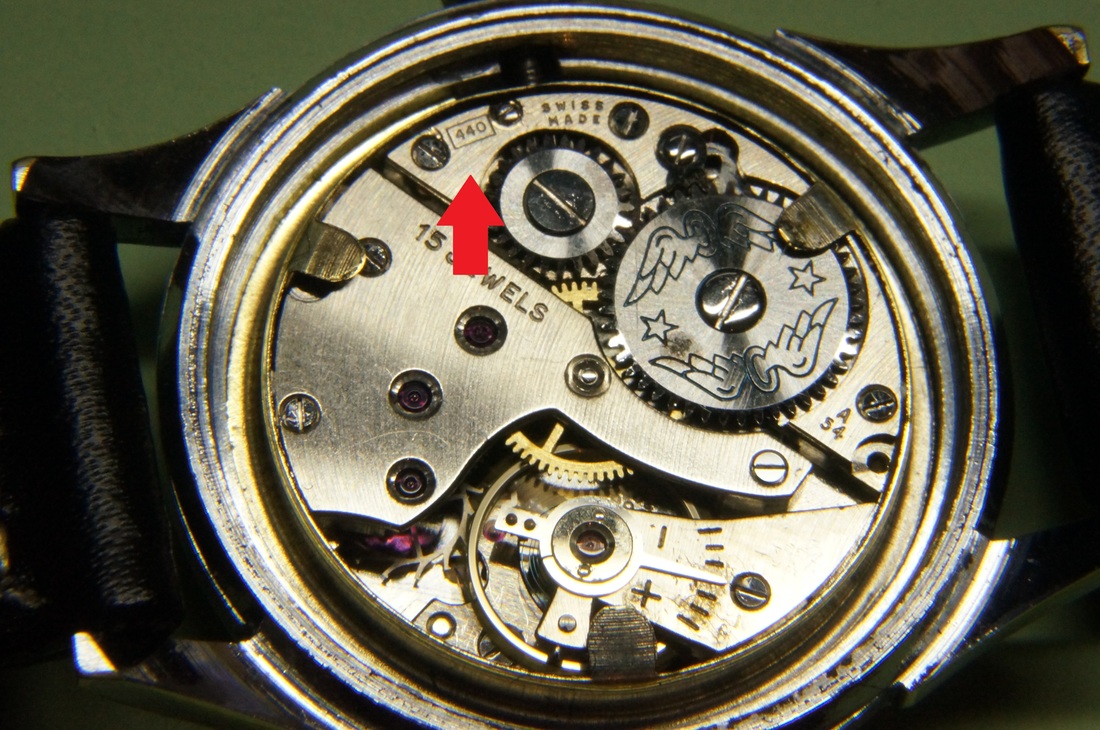 When no calibre or marking is visible on the rear working movement or even on the dial itself we then have to remove the dial and hands to see if a clue has been left by the maker.  Used by a wide range of Swiss manufacturers is a shield type mark with initials inside denoting the maker, this is more commonly know as an Ebauche mark ( more about ebauche in another article ). The Ebauche mark is not always present on every watch but when it can not be found on the rear it is then often found on the dial side plate ( see photo below ) 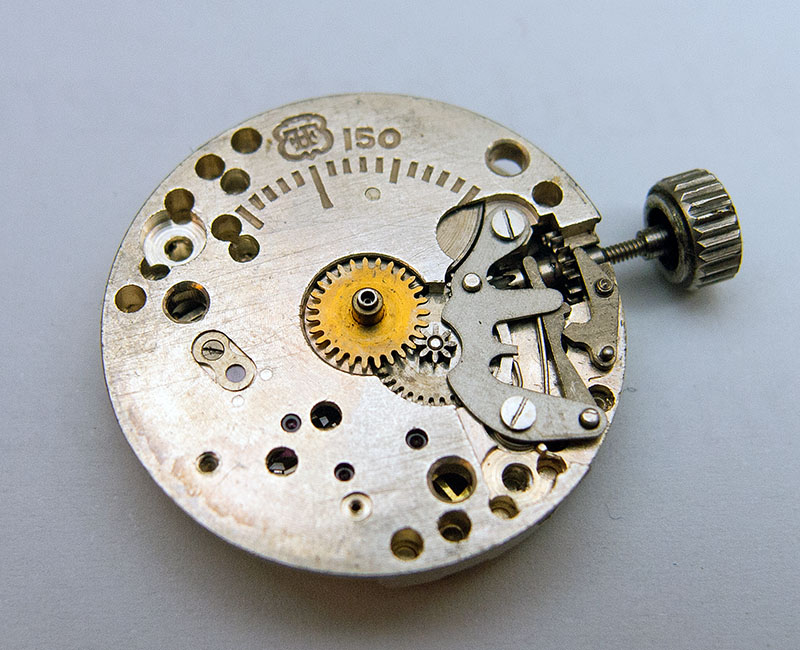 As you can see from the above image there is a logo of FHF with inverted F's which stands for the manufacturer Fontainemelon, this is not a strange fruit but a place in Switzerland and name of a specific manufacturer. Next to the logo they have added the calibre number of 150, but on most movements the shield with the initials is all that is present. This shield is now more often seen on modern movements marked under the balance wheel along with calibre number ( such as the commonly known ETA/Unitas 6498 ). For more information on specific manufacturers and their marks please click on the Markings drop down tab.

When you have been repairing watches for a good period of time you will begin to notice that certain manufacturers favour a specific design theme across most of their calibres. Quite often a manufacturer will prefer to shape their plates and bridges in a certain manner, this can even be applied to the way they make certain parts such as setting lever springs or pallet cocks. After a few years working with different watch movements you can identify manufacturers by only seeing one or two parts, there can be a very visual difference between the way Omega make a drive train bridge and the way Waltham do. Whilst this is not an absolute method, it is one of the many resources a watchmaker uses to know what he is working with.

A similar knowledge that goes hand in hand with the above is the way or quality in which a part is made or finished. This again is not a 100% sure fire way to identify a movement but acts as additional key marker in identifying a movement or part thereof. If we were to compare say, the pallet of a watch movement, then a clear visual difference can be spotted in the quality between one made by Omega, IWC, Eterna, or Longines, and one made by Seiko ,Ingersoll, Timex or even Smiths.

This section is not made to identify every single movement ever made, as that would be impossible, but hopefully there is enough here to help guide you on your way to identifying that timepiece you found in your draw/carboot/ebay auction etc.

www.ranfft.de - This site contains a huge amount of info on hundreds if not thousands of watch movements from nearly every make !

www.vintagewatchstraps.com - A superb site with so many interesting pages of information and very well written